Bowie on the Houston wall 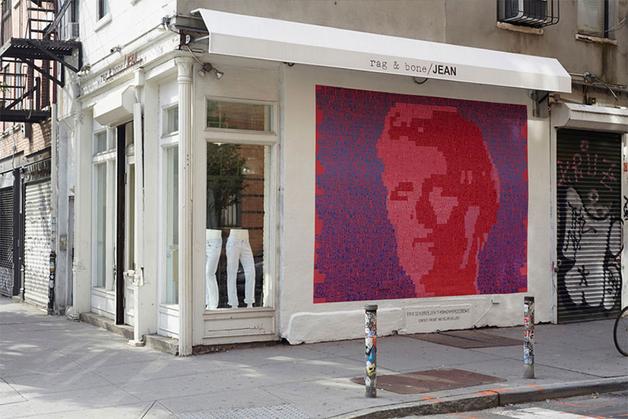 We're loving artist Erik den Breejen's David Bowie mural, Fashionheroesbowie, on our Houston Wall. Based on a live photo from the 1978 World Tour, the image is composed of approximately 900 words from the iconic Bowie anthems Fashion and Heroes. We caught up with the artist to discuss the project and his work...

When was your foray into fusing painting and music/lyrics?

I've been working with the word blocks for almost eight years, and the text often comes from song lyrics. Sometimes it comes from other sources. The Smile show was the first time I'd taken a field of word blocks and made them suggest an image, though, and that's mostly what I've been pursuing since.

Why did you choose David Bowie as the subject for the rag & bone mural?

I tend to follow my passion and instincts when choosing a subject. I've been a huge Bowie fan for years, but have never incorporated his words into my paintings. When I was invited to do the rag & bone mural, the thought of doing fashion outside of a fashion boutique seemed a perfect fit. As I developed the image, those lyrics alone didn't quite have enough emotional impact to carry me, so I brough in Heroes, which knocked me out and created an interesting lyrical juxtaposition. From there, I was able to get a feel for the painting, which informed the rest of the decisions.

Can you explain the process - did you always have that image in mind?

I made two other plans. One was a Ziggy-era Bowie image, which I knew was anachronistic with the lyrics I was using, but I liked it anyway. The other image was either Thin White Duke or Berlin era, and I loved it, but the color and light were very complex. It seemed like something more suited to a slightly smaller scale. The third one had the impact I was looking for, and the composition and the tilt of the head gave the subject a sense of importance, which I think is why so many people thought it was a president. I like that, because there's a political dimension to the lyrics of both songs.

How long did it take to complete the mural?

I spent a couple days making plans, then seven long days painting the letters once I'd painted the colored background.

Why did you decide against using stencils?

The stencil thing comes up a lot, but if you look at it, it's just because the word block itself resembles a stencil. There isn't any way you could actually make a stencil for the word block because the letters themselves are the negative space. I'm interested in the hand, too, and the funkiness and awkwardness that come from that. I like the fact that it's a bold graphic image from afar, but when you get up close, the words are a bit cartoony. Yet the content of the words is usually quite serious. All of these flips and folds are very appealing to me.

You had some funny guesses about the identity of the subject - who was the best one?

I read Marilyn Monroe online. That was pretty good.

How does it feel to see the mural on Bowie's website? Were you concerned about his reaction?

I think it's fantastic! I hope he's seen it. I was slightly apprehensive because of past experiences, but not too much, because I know Bowie is also a visual artist and a super smart guy. I think if your work has permeated the culture to the extent that his has, you might not be too worried about your lyrics being transformed into an image of yourself. I am definitely a fan, but I hope I am also bringing something to the table artistically.

As a former band member, you are obviously a music fan. Who are you a fan of and who would you love to paint in the future?

I'm into a lot of different music, but I think the 70s might be my favorite decade. I'm in the midst of working on a second Harry Nilsson painting, and am planning a Jackson Browne one and a Gerry Rafferty one. After that, I want to do Marvin Gaye, Sandy Denny, Elton John, Prince, Joni Mitchell, Robert Smith, Scott Walker, Ray Davies and on and on. As far as new stuff, the new Daft Punk album is a real achievement. I think the same thing about MGMT's last album, and can't wait for the new one. I'm also into Foxygen, Sam Flax, Ariel Pink, etc. I'm also very much interested in expanding the scope of the textual sources. I made a painting of Yeats's poem The Lake Isle of Innisfree which I thought worked very well. I've got a perfect Rimbaud passage I want to use, and also have my eyes on Shakespeare, Rilke, and maybe a little opera. And I'm toying around with the idea of using some of my own writing about music.

Did you listen to Bowie on this project?

I do tend to play the music I'm painting each day I work on the painting, be it an entire album or just one song. I did a California Dreamin' painting, and would just search for the tune on Spotify and hear all the different versions of it by different artists. Since I was so out in public (and up on a ladder) when I painted Bowie, I didn't feel comfortable having headphones on while I painted. But I would play the tracks back at home. I went out for dinner after painting on my birthday and Young Americans was playing when I walked in the restaurant. Then some Fleetwood Mac came on. Then Heroes. That was awesome.

For more information on the artist, please contact nick@freightandvolume.com at Freight and Volume gallery. Photos courtesy of Eric Wolfe. 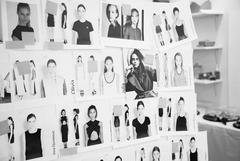 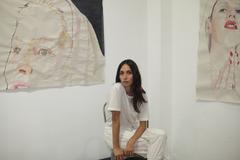