From the mind of legendary writer, producer & director Baz Luhrmann (The Great Gatsby, Moulin Rouge!, Romeo + Juliet) comes the Netflix original series, The Get Down.

In the 13-episode series a cast of up-and-comers joins familiar names, together including Daveed Diggs, Skylan Brooks, Jaden Smith, Herizen Guardiola and Tremaine Brown Jr., among others, to take hip-hop back to its Bronx roots. Based on the stories of pioneers in the era, including Nas and Grandmaster Flash, The Get Down tells of the emergence of hip-hop and the parallel realms of punk and disco through a group of semi-fictional South Bronx teens growing up in the late 70s.

Check out the trailer above and look out for the first six episodes of The Get Down on Netflix this August. 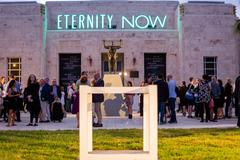