END OF SEASON SALE - Up to 75% Off - Shop Now
Free Shipping & Returns on U.S. Orders*
Chat Help Account Sign Up

For their first ever men's campaign, rag & bone cast American actor Michael Pitt to front their Fall Winter 2013 campaign. "Michael is a genuine, cool guy and we felt he was the perfect fit for us. He is the epitome of a free spirit," says David Neville. Shot day to night in the grittier parts of New York's cityscape, legendary photographer Glen Luchford lensed Pitt in black and white using 35mm and 16mm film and hand-printed the images. "Glen creates really beautiful images. He's also one of the few photographers around who still shoots on film. He's a true original and a photographer in every sense of the word," says Marcus Wainwright. Using the campaign's free rein concept as license to experiment, Pitt sacrificed his guitar as his personal contribution. "We parked the car around 42nd and 8th, we set up and I walked out into the middle of the street and smashed it. The people who were walking by loved it!," explains Pitt. 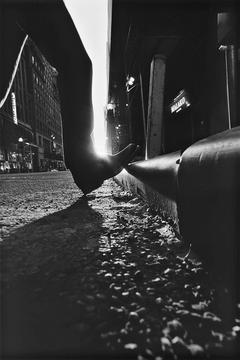